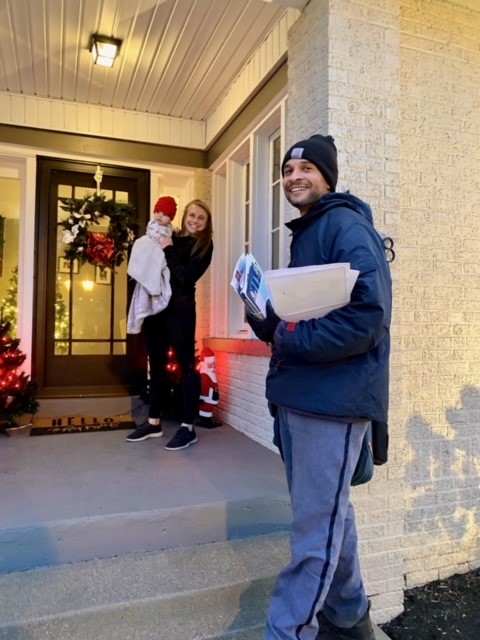 There's a part of Columbus Ohio called Clintonville. The houses are craftsman and vintage. Charming and full of character. The lots sit close to each other on quaint rows. The front porches graced with lidded boxes or the doors with mail slots. The mailpeople walk the rows and up to the houses to deliver the mail.

For 23 years a certain mailman named Karlton has walked his routes and watched house after house fill with growing families. New meetings, new unions, births, deaths. He's seen the houses and their inhabitants through it all. Families raise small children who grow up, leave for a stint and then tend to return to the same area and the cycle goes on.

The job could consist solely of checking numbers. House numbers, number of houses done, pieces delivered, days on the route. Head down. Mail to home. Next. But it's never been about the mail for him. It's the people who light him up. And because of that he did something simple but extraordinary this past spring.

There were 9 moms on his route that gave birth during a global pandemic. Some were first time moms, others more seasoned. Some he knew better than others. Some shared specifics of their journeys on their frequent chats. Others less so. But the fact was they were all welcoming new humans during a time of uncertainty in the world.

He watched the evolution of these women into mothers. The way they prepare, and research. The challenges they face. He sees how they sacrifice. The way they live out the job. The way that they are already the best moms for their babies and that having someone else to tell them so matters. He would see them at home, needing adult interaction, someone to talk to. And it wasn't just about them, he knew the kids needed it too. These women in changing roles needed connection, a sounding board, reality checks, friendship. Having two boys of his own, he knew that motherhood is a group sport. Not devoid of a father's input, but unique in a way that means women have a way of relating to each other that is special. He knew he could and did listen, but also knew that he couldn't always relate. That they needed each other for the "yes, it'll be ok."

He saw the need and he acted. He asked. Could he collect numbers so they could talk to each other, mom to mom. One by one they agreed. And the list grew. He added the names to a card and handed them off to one of the group members who he'd known as a friend. She started a text chain that led to conversations and meetups and smaller groups. And even a distanced porch party. In the middle of a pandemic where "distance" was mandatory, new connections were made. New lifelines.

When he's asked about why and what inspired him, he'll tell you. "it's the intangible not the tangible that matters." He credits that phrase to his mother and says he wholeheartedly believes it to be true. He'll say he watches the nonverbal, body language, eyes and eyebrows. This self proclaimed "walking bartender" is keenly aware of humans. And the way he sees humanness and imperfection and need as a beautiful part of life is something we can all learn from.

This man, delivering mail. Eyes and ears open. So aware of human imperfection but still all in. All in for the task of connection. Listening. Stopping. Being still long enough to hear what was really behind the words. And caring enough to act.

When asked how we can connect more meaningfully he listed the small things. The simple belief that we can always learn from each other. That connection matters. That communication matters. That saying "hi", making eye contact, and common courtesy all matter. That we should never be too busy to acknowledge each other. It all starts there.
In a world that can seem off kilter for any number of reasons, there are people doing the work of being ears, eyes, and facilitators of good. Simple but impactful gestures. In this case it was a local mailman and a group of women and their babies.

In a world where you can be anything, be kind. Be like Karlton.